Number One Solutions Co., Ltd. (Location: Meguro-ku, Tokyo, Representative Director: Tetsuo Megura, hereinafter our company), which is engaged in the blockchain development business, is a local currency operation system "Coinity" that utilizes blockchain technology specialized for local governments. Will be developed and will be available from September 2019, 9.

Coinity is a token economy*1 construction system that can issue local currency.
The three characteristics are as follows.

Introducing a community currency system at low cost by using a general-purpose template.

With the single sign-on function based on blockchain technology, it is possible to inexpensively link with other services such as messaging apps and shopping sites within the coin app. 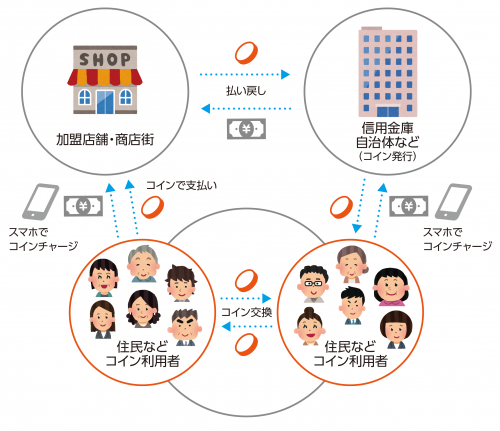 *1: Token economy
The token economy is an economic zone via tokens (digital rights certificates). It attracted attention because it used virtual currencies such as Bitcoin and Ethereum.
It is distributed as a currency that can be used on the Internet, and you can purchase products using virtual currency at shopping sites and physical stores.

Municipalities that have introduced coinity and credit unions in the area can issue their own coins. To use, download the dedicated app from the App Store or Google Play to your smartphone. To collect (charge) coins in the dedicated app, you can purchase from a QR code at a credit union or a local government, or purchase a prepaid card at a member store.
Coins can be used at member stores and shopping streets in the same way as regular payment. Residents can use coins by exchanging with each other, such as by giving volunteers a reward, and exchanging with tourists. Coins can also be sent from the organizer to participants as a prize for participation in events sponsored by local governments and as a reward for local volunteers.

According to the report "Current State and Future of Local Currencies" (published by the National Diet Library, Research and Legislative Affairs Bureau in September 2018), many local currencies were created in the late 9s and early 1990s. Initially, the main purpose was "eco-money" as a consideration for local volunteers who are difficult to evaluate with ordinary fiat currencies. Since the local currency was a banknote system at that time, the labor and cost required for issuing, managing, and converting cash placed a heavy burden on the operating base, hindering the sustainable operation and development of the local currency, and the boom was overturned. It is supposed to be.
Today, digital payments are used on a daily basis due to the spread of smartphones. As the work load and cost have decreased, the number of situations where it can be used has increased, and local currencies are once again drawing attention. An increasing number of local governments issue their own local currencies such as "Sarubobo Coin" (Takayama City, Gifu Prefecture) in December 2017 and "negi" (Fukaya City, Saitama Prefecture) in May 12.

There are three major issues facing local governments. The first is a decrease in income due to a population decline, and the second is the weakening of relationships between residents. The third is the decrease in the number of participants in events sponsored by local governments.
Municipalities can solve these problems by introducing local currencies. The following three can be cited as merits.

According to the "World Values ​​Survey" (2005, OECD), 16% of the respondents answered "only occasionally" or "not at all" about interactions with people other than their family, with Japan at 1%. .. According to the “28 White Paper on Welfare and Labor”, more than 7% of people “would like to help if there is a person in need in the area”.
In Tamba City, Hyogo Prefecture, which issues the local currency "Mimori", there is a possibility that the local currency will solve social isolation because the well end conference and settlement party will be a good meeting place for local residents and homecoming groups. I am trying.

XNUMX. Since it will be used as a financial resource for the local and local areas, it will lead to regional revitalization.

If you use credit card payment for the same fee, funds will flow outside the region

XNUMX. Data can be collected locally, so it can be used as marketing unique to the region.

According to the report "Usefulness of local currency in Japan with declining birthrate and aging population" (January 2017, published by Research Institute of Economy, Trade and Industry), local currency can lead to regional vitalization and secure financial resources for the following three reasons. There is a nature.

・Returning homes and residents moving into the community of closed communities
・A local currency that can express gratitude will be restructured to help each other
・Local resources can be smoothly circulated by revealing the value of services and goods in the local currency.

Issuing the local currency in this way may encourage local governments, shops such as shopping districts, credit unions, residents, and locals to mutually encourage the region and maximize the value of the region. ..
By using blockchain, coinity can be introduced at lower cost than using database. The on-premise version of the coinity*2 can be operated with an initial cost of about 1,000 million yen (excluding tax) and a monthly fee of about 30 yen (excluding tax). The initial cost of the cloud version is about 150 million yen (excluding tax) and 10 yen per month (excluding tax). As the scale of implementation increases, so does the price.
Coinity plans to link with existing payment systems, point services, coupons, etc. according to the needs of each local government.
We aim to operate the coinity in 1 groups (including verification tests) one year after, and 10 groups after three years.

*2: On-premise version
On-premise means installing and operating information systems such as servers and software in facilities managed by users (in the case of business use, companies).